I decided to upgrade my Model S to the Model B!

I should have some more awesome UI changes coming up soon! I know, my definition of soon seems to be somewhat strained...
Posted by Hemera at 11:05:00 PM 2 comments:

Security and Safety of the Model S

Yesterday I got an email from a fan about the safety and security of the Model S. I've heard from several others with similar questions. Not everyone is a computer wiz with years of experience dealing with the guts of computers, so I completely understand the fear. I'd like to share the email exchange for anyone with similar concerns.


Hi: I am very impressed with your technical skills. I am assuming you are an
engineer (electrical or computer). My new Tesla S is arriving in June and
I am nervous it could get hacked. Are there any things I should to check
my vulnerability or links I should read. Any info is much appreciated.

What would make you so nervous about getting hacked? Have you been given a reason or is it more a irrational fear? The car is practically impregnable from remote attacks. The security team at Tesla is top notch, I know because I've seen the security in the car myself.

If it's not a remote thing you're worried about and more someone tampering with the car, if you look at my blog you'd see I had to take apart the entire drivers side dash of the car to be able to do this. It took me 4 hours. I'm only one of 3 people in the world that can do it as well. Regardless, once someone has physical access to something it's impossible to have it 100% secure. Think of it this way, if someone was looking to cause trouble for you they could cut the brake lines, or track you by attaching a GPS device to your car, or slash the tires on your car, etc.

You wanted to know how to keep things secure? Do exactly what you do to keep people from cutting the brake lines or stealing the money out of your car. It's a tool in the car just like the engine or the tires or the brakes, so protect it the same way and you'll be just fine. As for remote hackers, there is literally nothing you can do. Tesla has some of the best minds in the world protecting your car, and it'd take a modern day Einstein to outwit them. And really, why would she target you when there are much better things out there for someone like her to target? She'd be stealing money out of bank accounts, not toying with Pat's Tesla.

Don't worry so much about it, and enjoy the car. If I were you I'd be far more worried about having my car dinged by some car in the parking lot.


Lol, true. I guess if I follow normal precautions like passwords and regular updates to the software I should be ok. I will be street parking the car - so I should most likely worry more about scratches and bird poo.

I have confidence in the Tesla engineers and programmers to be of high quality, since Apple and Mercedes Benz having been poaching them.

That is exactly what a responsible owner should do to help keep their car safe and secure. Thank you Pat for allowing me to put to rest some of the security concerns from owners and future owners. Congratulations on the Model S. I'm sure you'll come to fall in love with it as much as I have. :)
Posted by Hemera at 12:25:00 PM 1 comment:


After 2 weeks of cross-compiling, struggling with ALSA, and fighting with Xorg and Nvidia Tegra drivers, I finally have something I would consider presentable!


The car would make an amazing media center. Holy crap it sounds amazing! The video player I'm using here is SMplayer. The performance was far better than I thought it would be, even with the wonky EGL and codec situation I'm currently in.


Some details, this is running a Gentoo arm system, cross-compiled using a qemu-user chroot environment. Yes, that's right, Gentoo, running on a Tesla. All those USE flags, CFLAGS, and optimizations are going to add speed to my car. My 5 second 0-60 will be faster than your 5 second 0-60!

There was probably at least 5 days of continuous compilation going on here. The system is almost completely independent. "OMG did you seriously flash the Tegra?" No, I didn't go that far. I'm running Gentoo in a chroot environment within the Tesla OS itself. I will definitely be making a post later diving into the technical details of it.


The desktop environment is XFCE. It's a great mix between minimal and pretty. I did go with Fluxbox at first but... it's a little TOO minimal. Not saying there's anything wrong with that!


I have a few applications installed, though not that much yet. I tried a bunch of browsers but the best one so far is NetSurf. I'm currently fighting with the 3D \ EGL and some of the Nvidia codecs. Once I get that all ironed out a lot of things should be performing far better.

The captions in the pictures are small parodies of very real quotes at http://funroll-loops.info/

I know some of you are eagerly awaiting an update, as well as proof that this isn't all some elaborate Tesla PR drive or hoax. After spending a week working on something, I finally have it almost working. I should be able to make a post about it soon! It's pretty exciting :D

Oh, I made a twitter so I can share things that wouldn't really work in making a whole blog post about it. I'll be posting interesting findings on there etc. For now, I'll leave you with something I found today: Plug a mouse into your car.
Posted by Hemera at 12:51:00 AM 1 comment:

A couple months ago, for God knows what reason, I decided to hack my Tesla Model S.  My goal was to get root access to the touchscreen, henceforth known as the CID.  I spent about 2 months of research and preparation for this project.  When I was confident everything was all set, I grabbed my tools and my laptops and went to work.

The first step was to remove the little side cover right by the door on the drivers side.  This reveals a little white connector that you can see here sticking out. 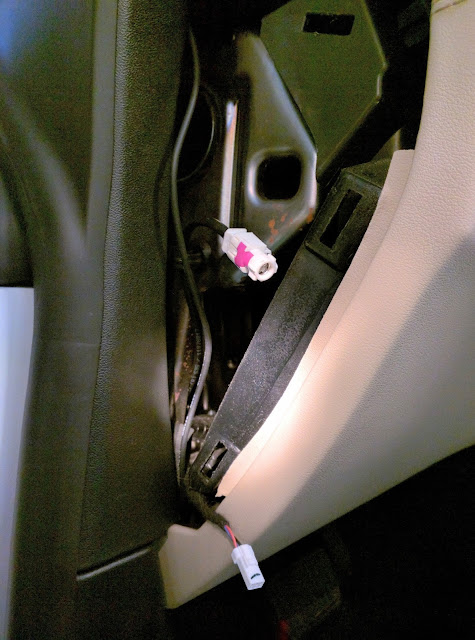 It may look weird, but it's basically a CAT 6 cable with a proprietary connector from Tesla.  You can connect to it by taking a regular network cable and adding the male proprietary end to it, or try to buy one from a salvage.  The cable I used was one I made myself. 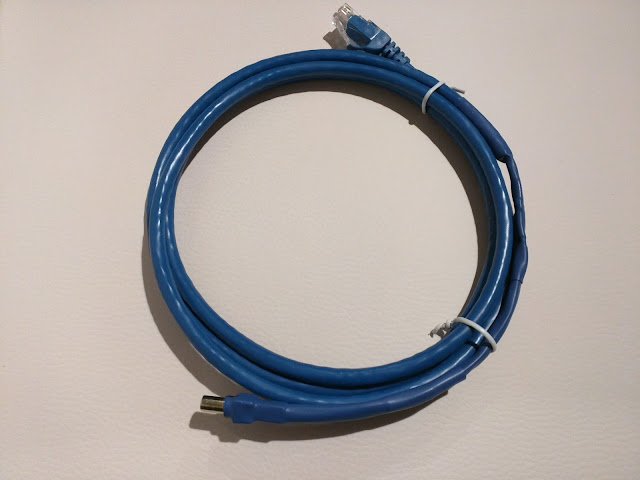 So, the white access wire is where I will finally get access to the network and can perform the hack itself. Unfortunately, it's currently locked down behind a VPN that requires a password to unlock, which unfortunately I didn't have, so I had to unlock it. 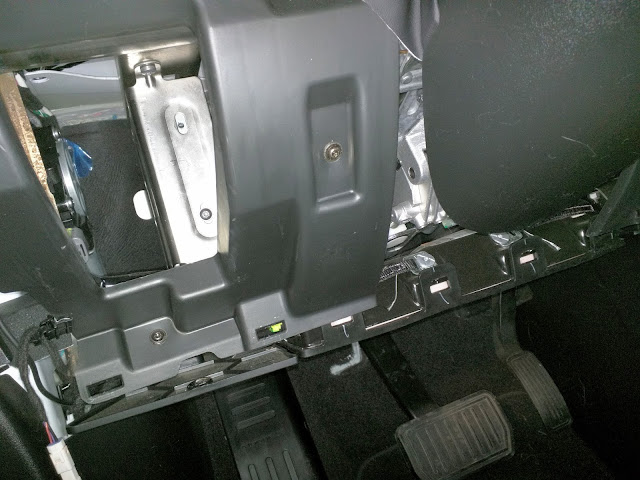 After the side cover is removed I had to remove the huge trim underneath the steering wheel.  It had 9 clips that I had to really fight with my wedge to get disconnected.  I finally got it off though. 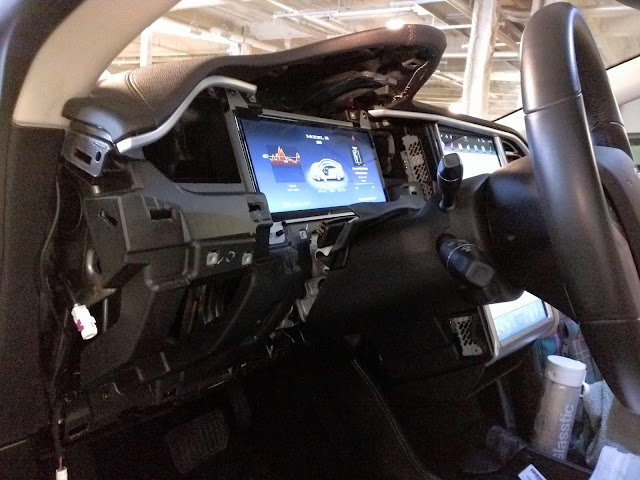 Oh my god, this took forever.  I had to unscrew the large top pad which covers the entire dash from the chassis.  After that, you have to pry that sucker up which unhooks a few clips but still wants to fight you the whole time.  It was covering the screws for the vents.  The top pad is sensitive, as is the chrome edge to it, so you have to be careful not to bend it while simultaneously prying that sucker apart so you can unscrew the two screws.  After that you just remove the instrument cluster cover and pull the vents out. 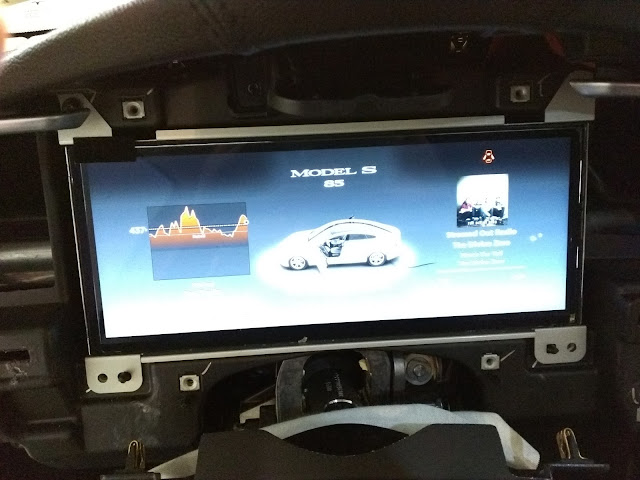 The instrument cluster needs to be removed.  Once again, this required lifting the top pad to access the two upper screws.  Honestly, I took this picture after I had removed the bottom screws because I was dreading having to remove the two on top... 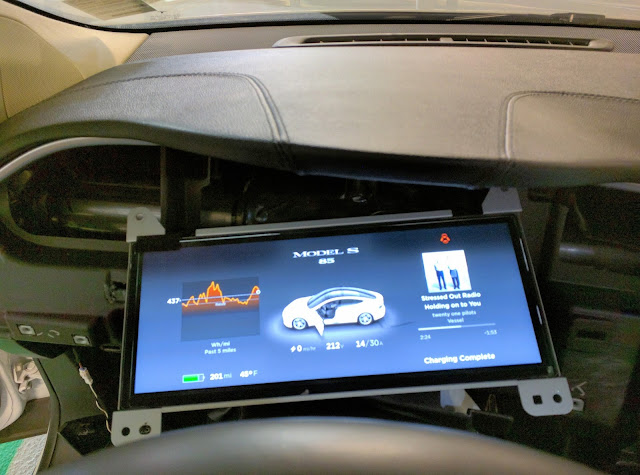 I finally got the two screws removed, though.  I'm sure by this point you're wondering how in the heck this will manage to unlock the white connector.  You'll see soon. 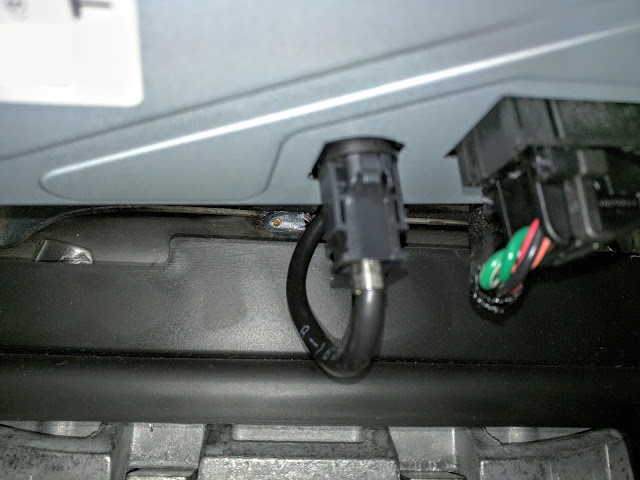 And here's that golden ticket: another connector like the white one! This one is a connection to the CID (touchscreen).  The IC connects to the CID through a web interface to get updates on things like the navigation, music, etc. as well as send commands like opening the sunroof. 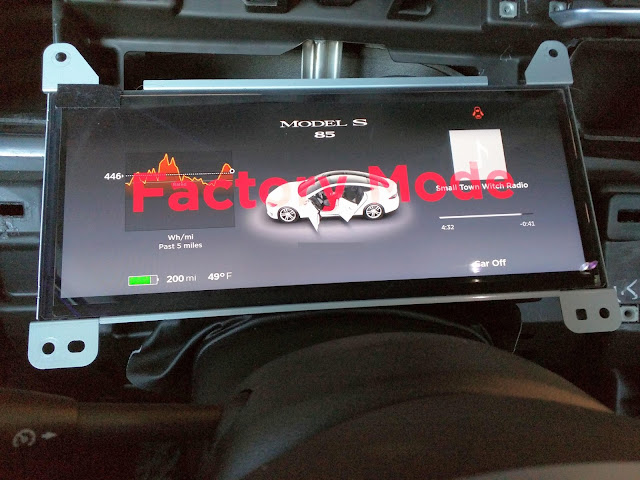 What I had to do was disconnect the cable from the IC and plug my earlier cable in to it.  This allowed me to get the car into Factory Mode. Once that was done, I unplugged my laptop and plugged the cable back into the IC. 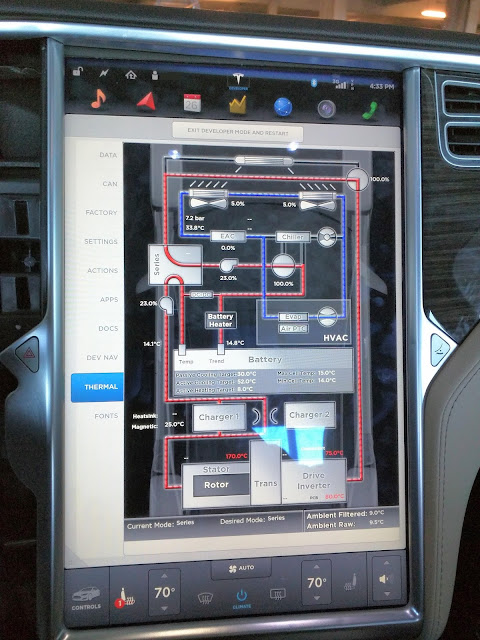 If you hold down the Tesla T in Factory Mode you end up with the "Developer Mode" screens. I'll probably make a post another day going through all of it.  I had to add this screen though.  It's the thermal status screen, and most definitely my favorite.

The car is in Factory Mode, and thus the white cable back at the beginning in the side panel is unlocked and ready for me.  So, I plugged in my laptop and ran a script I had pre-written: obtain_root


This goes through a secret process that eventually gets me connected to the CID (touchscreen) with root privileges.  From there I had a bunch of stuff that ran automagically to set it up so I wouldn't have to go through all this crap every time I wanted access to the car. Then, I just disconnect from the white cable, turn off the factory mode, reboot the car, then reinstall all the stuff I removed.  Bam! Hack complete.

The car is rooted, now what? I have a lot of things planned and have been doing a lot of exploring.  I'll be posting my findings, pictures, videos etc. here.  I have something awesome I've been working on.  Hopefully I can get a video up sometime soon.
Posted by Hemera at 2:14:00 AM 13 comments: